I recently meet a pal of mine who we hadn’t talked since High school. High school that is one place that only He who is above can explain how I survived , because to me its still a mystery. If survived that place then there is no where i can not survive. Things were pretty tough back then reason being it was my first time in boarding school. Waking up at 4:30 AM, showering with icy cold water!!!!. It was at this time that I learnt the art of sleeping while standing up during mass time. I am not proud of it but hapo ndo maisha ilikuwa imenifikisha. Our school was not like any other school. I used to call it a military camp where we used to shave our heads clean. Yes so clean that there was this one time we went out for a literature symposium some boys school called us potato heads because of our clean-shaved heads, and to top it all we had to wear long checked skirts with pleats. We never used to go for outings the only time you would see the school gates was when you were really sick, mid terms, opening and closing dates and the once-in-a-looooooooooooog!!!!!! while symposium. Ten o’clock tea was luxury to us. Lets not forget about the hospital corners on our beds which was mandatory and how we used to arrange our clothes in an orderly manner dark colored clothes at the bottom lights colored clothes on top, thick clothes at the bottom light clothes on top.  We were approximately 200 students and everyone new each other so Fridays instead of entertainment we used to have socializing sections or watch bible stories. I should probably dedicate a whole story on my High school life experience because that was one heck of a ride, what seemed normal to you guys was not for me. I thank God for the holiday tutions they broke the boring routine life back in school and it was always exciting for me to met new people and shared experiences. 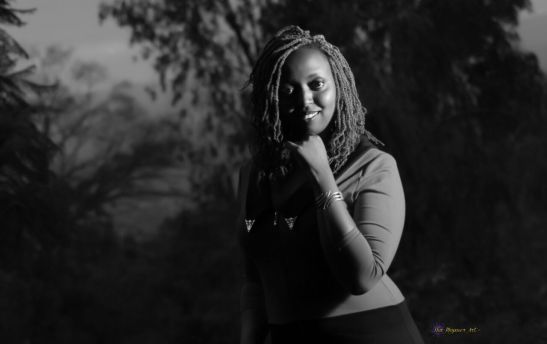 One of those people i met was an incredible artist by the name Evie  Mwangi whose stage name was Evie Vara. At the time she would just sing for fun, but she had one very unique voice. We immediately became good buddies due to her bubbly nature. It was way later after we had lost touch and i started seeing her posters online and i was like “Damn! this girl is really doing great for herself!”. As luck would have it a few months ago I was working for some company that organized events every month where up artists perform and so i decided to reach out to Evie and see if she would be interested.  Luckily, she honored the invite and was able to share the stage with big and amazing artist such as sauti sol, Big pin, Syd, the lovely Tallia Oyando just to name a few .

After the event, we decided to catch up and make up for the lost time. Since I am very inquisitive in nature asked her a whole bunch of questions which i will gladly share with you.

Curious as i was you probably would guess that the first question i asked (and no if you thought i asked her why music, I mean, she has an angelic voice! What mad friend would i be if i asked her that) so i asked her how her musical journey started. With that, she started narrating to me memories of the good old days. Speaking of the good old days my question to all those who will read this, why do we call them that? is it that the time we are at now is good enough? So, back to my story. She told me that she knew music was something she would pursue so by chance, Miwo from Onyx Musik Records happened to find them hanging out at Peekay and the late Shrekeezy’s place. (will tell you more about Shrekeezy some other time. he was one awesome guy), and they were introduced.

Professionally, she started singing during the latter months of 2013 with her first official release being a cover for “Pray Me Well” by Chrisette Michelle featuring Rob Glasper.
Her musical journey has been full of ups and downs; in many ways an eye opener. Hey, she’s young and still learning basically- learning is an endless journey, huh?
She tells me that to her, being able to touch and inspire different people in different ways through her work is fulfilling to her since she purposes  to positively impact peoples lives through what she does.
Viva la Eva! (ok, that’s kind of a forced pun…but u get the point yeah?) Long live Evie! N her music :-). Recently Evie released her new “single you and i”an amazing jam i might say. I only listened to the song twice and I just fell in love with it.

Words of advice from Evie: Every moment above ground is a blessing. Live while you’re alive. You can always get intouch with this lovely lady through: